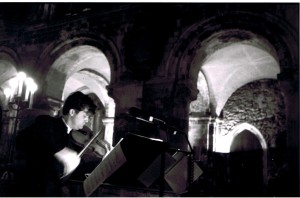 Every time Ouija is performed it’s a bit of an adventure for me, because of the way that the solo violinist takes the expressive ideas of the piece and reshapes them in their own way, differently every time.  The piece is ‘about’ discovering unknown voices and listening to what they can tell us, and in some ways that’s true of what happens with the soloist himself.  Peter Sheppard Skaerved has played it lots of times now and it’s amazing the way that he is always totally creative with it, never repeating himself.  In a different way, it’s always fascinating hearing the piece played by a different violinist, because every player has a different personality, and that always comes through very clearly when the piece is performed. 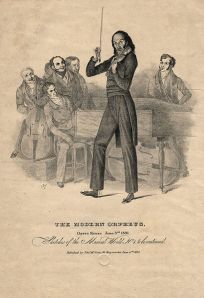 So I’m really looking forward to going to Romania next week to work with a fantastic young violinist Radu Dunca, who’ll be playing Ouija in Cluj on Thursday 4th December and again in Bucharest on Saturday 6th, in concerts by the AdHoc Ensemble.  Radu plays with great spontaneity, feeling and virtuosity.  See Radu playing in a rooftop concert.  Radu’s been rehearsing the piece from the score, and it’ll be interesting to see if the score actually communicates the ideas that I want to put across – in the case of this rather unusual piece which gives a big creative role to the soloist, it was hard to decide how much to specify in the score, and at what point to back off and leave it to the soloist to decide what to do.  Radu and I will have one rehearsal together on the Wednesday, and then he’ll be performing the piece (in a slightly shortened version) the next day.

The first concert is in the Sala studio, Music Academy “Gheorghe Dima”, Cluj,  on Thursday 4 December, at 19.00,  and the second is in the ISCM Festival Meridian in Bucharest at 19.00 on Saturday 6 December, in the “Aula Magna” of the Cantacuzino Palace (Uniunea Compozitorilor and Enescu Museum).

Jeremy Thurlow is a composer, writer and pianist. His music has been performed by the BBC Philharmonic, Sequitur, the Fitzwilliam String Quartet, Endymion, the Kreutzer Quartet, the Schubert Ensemble, the BBC Singers, Matthew Schellhorn, Rolf Hind, among many others. His book on Dutilleux is published in French by Millénaire III, and he has also written and broadcast on Messiaen and numerous other twentieth-century composers. View all posts by Jeremy Thurlow